Has Kanye West Gone Too Far?

For a few seconds during the 2015 Grammys, it looked like Kanye West was going to repeat his infamous stage-crashing moment from the 2009 VMAs. But to everyone’s relief, he aborted his stunt and let Beck finish his acceptance speech.

Just when I thought, “Hey, that’s pretty cool of him for poking fun at himself”, he eventually DID rant about the award. Sadly, it turns out he couldn’t stop himself from dissing another artist and his hard work. 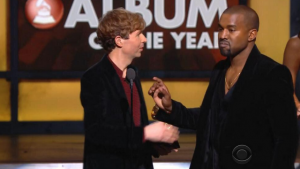 As far as Alpha Maleness goes, I’ve always thought Kanye had it going for him. I mean, he’s won multiple Grammys himself and has worked with the biggest names in the music industry.

Not many other people can match what he’s done, and there’s no denying the hard work he’s put into his own career. That alone puts the guy into rock star territory.

So up until now, Kanye seemed to have that Alpha Male stuff sorted out, even in spite of his past controversies. But his latest rant has somewhat diminished that image, especially because he seemed threatened by another guy’s success.

And to me, that’s far from what an Alpha Male would do. Instead of tearing another guy down, he would be secure enough to be happy with his own success and play it cool.

In the end, I was like, “Dude, why you gotta be hating? The other guy won, get over it!”