Here’s a better way to figure out women

I think most guys wish they were psychic. If you could read a girl’s thoughts like a book, you’d probably save yourself a heap of trouble.

Think about how easy it would be to plan your next move if you already knew what was going on in her head. You’d know where you stood with her, and you wouldn’t risk saying or doing the wrong thing.

However, having the ability to read women doesn’t have to be a fantasy. There is, in fact, a way to decipher a girl’s words and actions without looking into a crystal ball.

To unlock the “secret code” to her mind, all you need to do is focus on a few key areas:

One of the basic things I teach men is to shut off that inner monologue that they tend to have when they’re with a girl. Some guys are so busy thinking about the outcome of the situation that they miss out on the important details.

For example, one guy I know used to ask himself stuff like, “Will she be open to a second date?” or “I hope she doesn’t think my outfit is lame…”

I get it that guys new to dating tend to get jittery and think about these things. But when you think about it, it’s just a nervous tic that doesn’t help your inner game at all.

That’s why there’s really no point in paying attention to that noise in your head. To keep out those distracting thoughts, focus on HER instead – it’ll help you figure out her motives much easier.

For instance, consider her actions – is she consistent, or does she tend to flake out from time to time? 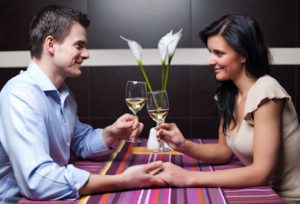 A lot of guys I’ve helped often complained that the girl they were dating would be sweet one minute, then cold and aloof the next. If you’ve found yourself in the same situation, you’re probably familiar with this frustrating uncertainty.

Also, ask yourself: is she going out of her way to see you or talk to you?

A client of mine was having trouble with a girl who would be available on a given week, then seemed to fall off the grid on other days. Just when he thought he was making headway, she’d had have all sorts of reasons not to see him.

Don’t waste too much of your energy trying to analyze the situation if you keep going back to square one with a certain girl. You might think that she’s complicated, but her behavior is sending a clear message.

It’s safe to say she’s not interested in anything long-term with you. But don’t take it personally – it just means you haven’t found the best match for you yet, so keep looking.

#2: Observe Her When She’s With You

Another good way to read her is to check out her body – literally.

I don’t mean ogling her, but rather listen to what her gestures and other movements are telling you. There’s a wealth of information behind what she doesn’t say out loud.