She Broke Into His Phone: Funny or Crazy?

Pop quiz: you’re out with your buddies, and you realize your girlfriend played around with your phone. What do you do?

That’s what happened to this guy. While he was out with the boys, he discovered that his girlfriend made some interesting changes to his phone.

And by “interesting”, I mean setting his lock screen and wallpaper to a couple of “I’m watching you” selfies featuring his girlfriend’s stern face.

Some people thought it was funny, while others were creeped out. A bunch of guys commented along the lines of “He lucked out with this girl”, and some wondered why she was “still dating someone she doesn’t trust”. 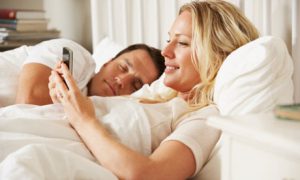 Then some reactions were mixed, such as: “If she’s joking, she’s funny and hot. If she’s not joking, she’s psycho and somehow even hotter…”

If you were in this guy’s shoes, would you have a good laugh about it, or start planning an exit strategy with your buddies? Where do you draw the line between hilarious and straight-up crazy?

If you asked me, I’d say this dude found a winner. I’ll take a cute girl with a great sense of humor any day, that’s for sure.

It’s perfectly harmless fun, and there’s nothing possessive or clingy about a good-natured prank.

However, there are plenty of guys (me included) who’ve dated genuinely crazy girls. And that’s why you still need to keep an eye out for irrational behavior in the beginning.